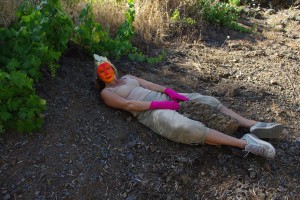 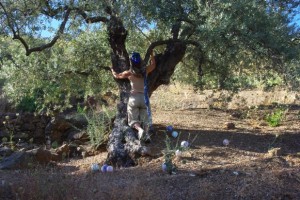 Place: Spain, Andalusia. Material: Body costume, textile and paper. Category: Performed Nature Art Photography. Concept: During a course in Art theory in Spain, I took the opportunity, experimenting with an idea based on my latest and upcoming project. This project is about identity, modern lifestyles and nature. This project examines human beings as “fragile creatures”, in her attempts to relate to “untamed forces” in nature and to her contemporary civilization. The project works with visual symbols like the mask and/or site-specific arrangements. This three performed photos were inspired by some of the lectures being given at “Pictures of Holiness -Islamic, Christian and Jewish religion, visualized in contemporary art” (held by Tom Sandquist, Helen and Rudy Vegil).  First pictures was inspired from a lecture about Icons and following two inspired by a lecture about Rudolf Otto and “mysterium tremendous”. Performer: Paula von Seth.